The last few months have been very busy as you might have gathered by my posts. Part of that has been focusing on game design. And a good portion of that is Tempus Quest.

It’s based on the Tempus system I came up with for Tempus Imperium. It will be a 12 episode series released monthly in Button Shy’s Board Game of the Month Club. There is also going to be an episode 0 as a free preview of the system and a pilot episode for the series.

The original idea was going to be very different than Tempus Imperium but as I worked on it, it was becoming a very linear game with no variety and minimal choices. With the decision to stick closer to the original mechanisms of Tempus Imperium it opened up a lot of design space and had the benefit of all the testing Imperium had.

While the basic mechanisms are almost identical to Tempus Imperium with connect, spread, build and use being the basis of the actions, it has some changes that allow for a lot of variety between episodes.

In Tempus Imperium I use the full date and time to give a 10 digit number YYMMDDHHMM. This worked well and gave a simple 10×10 grid for the map. However, the top left corner created by the YYMM crossover didn’t change much. With Imperium I leaned into this by making starting with “18” a good thing. But some feedback pointed to players not liking the almost unchanging corner.

Since the plan for Quest is to be released each month, the top corner would only change with each episode anyway, so I decided to cut the year and month from the system. This gave me 6 digits instead of 10. So no longer a nice clean 10×10 grid. The first thing I tried was to just remove that corner of the map. So the setup is exactly like Imperium with a missing corner. Then I realized I can overlap the columns and rows in any number of ways. And each gives a unique probability for setups. Most importantly for the design variety is spaces that never get filled. These can be used to put static board elements in that don’t interfere with the setup. I used some for enemies in Tempus Imperium. So these different arrangements give very different feels for the board. 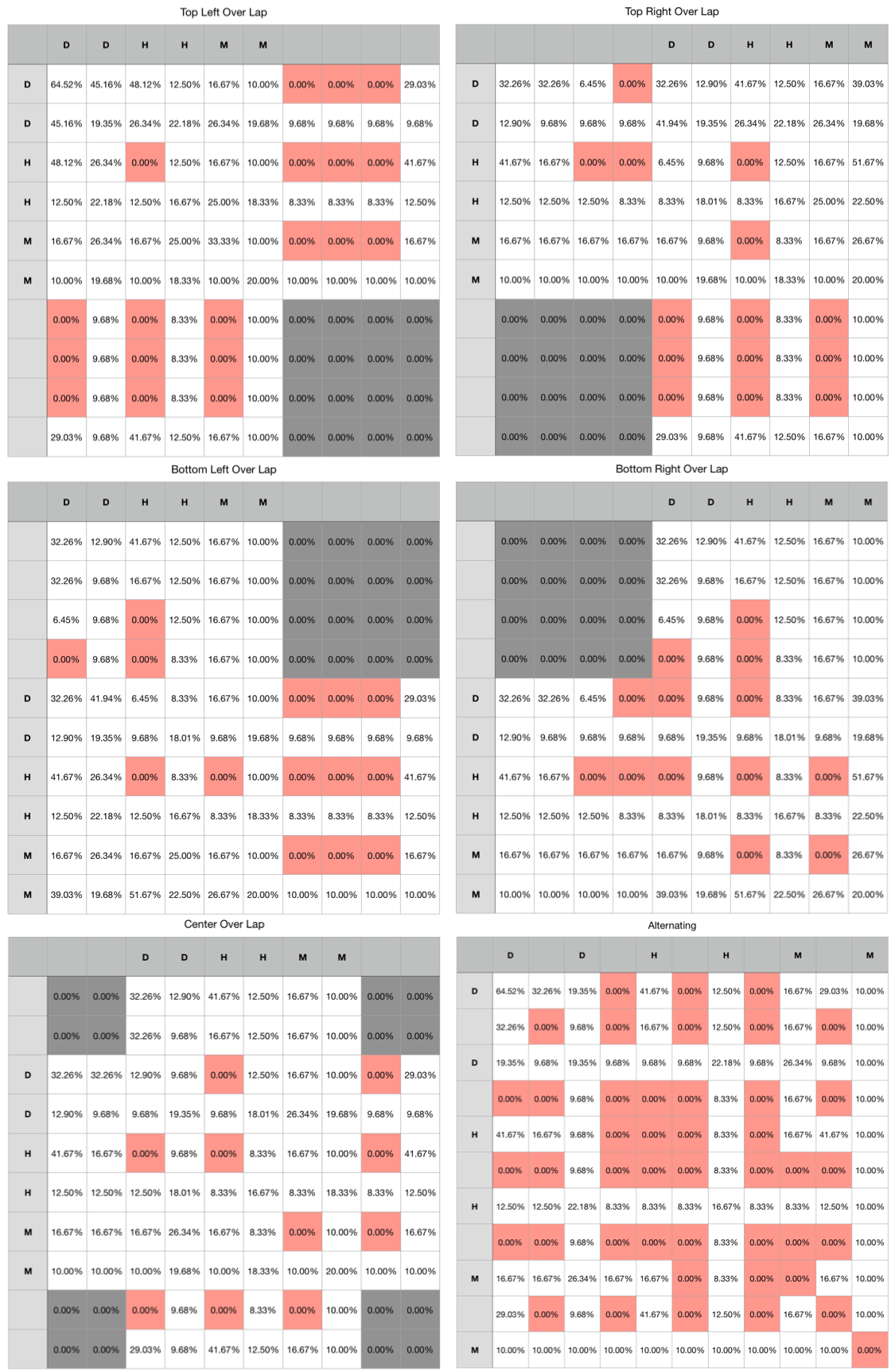 Another thing I realized is that I can use a hex grid instead of a square grid and the column row setup still works, though skewed a bit. This gives a different system of adjacency since each space has 6 adjacent spaces instead of 4.

Some of the changes were tough and required solving some new problems. Losing the Year and month starting numbers for actions made it much less likely you would have the actions you needed early on. So it had to become easier to change actions. Cutting down the digits also lowered the number of turns per round from 10 to 6. So the balance of how much the game fights back, and how long you have to play had to be tweaked.

Another big change is the goal of the game. In Tempus Imperium you play 50 turns over 5 rounds and try to maximize your score. It’s very much a puzzle to solve. With the numbers giving you a new setup each time. With Tempus Quest I wanted to focus more on the sense of adventure and the story. So the focus isn’t maximizing your score, but trying to complete the episode. Each episode will have a way that you lose, sometimes even multiple ways. There will still be measurable things so you can compare how well you did to other players and your earlier games.

I also wanted to tie the episodes together mechanically. In addition to the continuing narrative, things you do in one episode might carry over and give you some benefit or penalty in the next.

Working on this has helped me realize many ways this system can be expanded on and I hope you enjoy playing.

Also Tempus Imperium is now available on PNPArcade for free. It’s a great way to learn the basics of the Tempus System.